It is with very sad duty that we inform you that Brother Leonard Russell Stonehouse, has passed to the Grand Lodge Above. 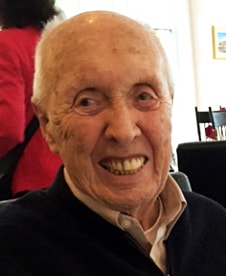 In loving memory of L. Russell Stonehouse of Bedford, Nova Scotia who passed away November 03, 2016 at the Camp Hill Veteran’s Hospital, Halifax, at the age of 93 years.

Russell was born in Springhill Nova Scotia, the son of Roy and Erma (Tabor) Stonehouse. Russel (Stoney) served five years for his country in the Royal Canadian Airforce during WWII with Canada’s first Bomber Squadron overseas, Squadron 405. This Canadian squadron was attached to the RAF Echelon Group which became known as The Pathfinders, always first on the target with one bay of incendiary bombs to light the way.

Russell lived from Springhill NS to St. John NB to Digby NS to Bedford NS; spending many winters in Florida in his retirement years; golfing, singing, telling many a story and one or two jokes.

Russell worked as a salesman for both Atlantic Wholesalers Ltd and for Brandon Henderson Paint Company of Halifax with sales routes in the Maritime Provinces. During his working life he also was a business owner of May’s Stationery Ltd and finally ended his working career as a Nursing Home Administrator for the Municipality of Digby managing Tide View Terrace.

Russel volunteered his time to be a community builder serving on interest groups as the Board of Trade, as a Councillor for the Town of Digby, many volunteer regimes with the Grace United Church, The Pines Golf Club, the Digby Curling Club, two service club organizations and a Master Mason of King Solomon Lodge of Digby.

Russell was revered as a kind hearted man, intelligent, hardworking, fun loving-always keen to talk politics, current events and history. Above all he cherished his wife Verna and his family with unlimited love.

There will be an interment later that afternoon at the family’s plot in the Fairview Cemetery. Heartfelt gratitude for the compassionate and very competent health care and guidance provided by Dr. Alison Wiebe and importantly his caring family of nursing staff and all therapists at Camp Hill Veterans 5th Floor Garrison West and M.J. Kelly of Fall River NS.

In lieu of flowers memorial donations may be made to The Dalhousie Medical Research Foundation. Get the form using the link below …