Below is an overview of what is commonly known as the Blue Lodge Degrees.

The Blue Lodge, is the fundamental body of Freemasonry. No other part of Masonry is accessible until one has received the three degrees of the Blue Lodge. Admission to membership in the Lodge, as in any part of Masonry, is by petition.

Freemasons do not recruit members. in some jurisdictions they have been allowed a very limited form of inquiry by a Mason to a friend who might be be a good candidate as a Mason however, a man who wishes to join the Lodge must request a petition from a Brother. 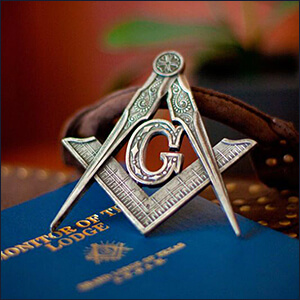 The basic qualifications for membership are that a man be of lawful age, believe in a Supreme Being, be of good character, and request the privilege of membership of his own free choice.

There is a fee for the degrees and at least a portion of this accompany the petition in most jurisdictions. Once a petition has been received, the applicant’s character will be investigated by a committee. After the committee’s report is received, the candidate will be balloted on at a meeting of the Lodge.

Usually a unanimous ballot is required for election to receive the degrees, however, in some jurisdictions, no more than one negative vote is allowed. Not everyone is elected. For this reason, traditionally the applicant must request the privilege of petitioning. If for some reason there a rejection, then he cannot claim that his friend solicited his membership but was unable to keep his promise.

In the Entered Apprentice Degree, the candidate is given his first opportunity to prove himself by his ability to fulfill a solemn obligation and to keep secret those things entrusted to him as such, while certain moral lessons are taught to him.

The working tools of the Entered Apprentice are the Twenty-Four Inch Gauge, and the Common Gavel.

The Common Gavel was used by operative Masons to break off the rough edges of stones and fit them for the builder’s use. We use it for the purpose of divesting our minds of the vices and superfluities of life, to prepare yourself to be fit for the Great Architect’s use in constructing His spiritual building.

The Fellow Craft Degree places the candidate under an additional solemn obligation concerned primarily with his duties to his Brethren and the Craft.

He is encouraged to become educated in the seven liberal arts and sciences:

The Mason is here taught about the symbolic wages of a Fellow Craft: Corn, Wine, and Oil. If a Mason chooses to proceed on to the Capitular degrees in York Rite, he will at that time learn more about being a Fellow Craft Mason, including their actual wages.

The Master Mason Degree places the candidate under a much more solemn and weighty obligation, which concerns his behaviors and duties towards his Brethren, and also to widows and orphans.

The Legend of this Degree is the most characteristic and influential in Masonry: The tragic death of our Grand Master Hiram Abiff, just prior to the completion of the Temple, and the associated loss of The Ancient Master’s Word.

The working tools of a Master Mason are all the implements of Masonry, but most especially the Trowel. The Trowel was used by operative Masons to spread the mortar which unites the bricks of a building into one single mass. We use the Trowel for spreading the cement of Brotherly Love and Affection.

Upon completing the proficiency of the Master Mason degree, a brother is able to hold office in his Lodge, continue his Masonic education by petitioning one of the concordant bodies such as the Royal Arch Chapter of the York Rite or the Ancient and Accepted Scottish Rite, or pursue the philanthropic opportunities available in Masonry through the Shrine Club or other Masonic organizations dedicated to such work.